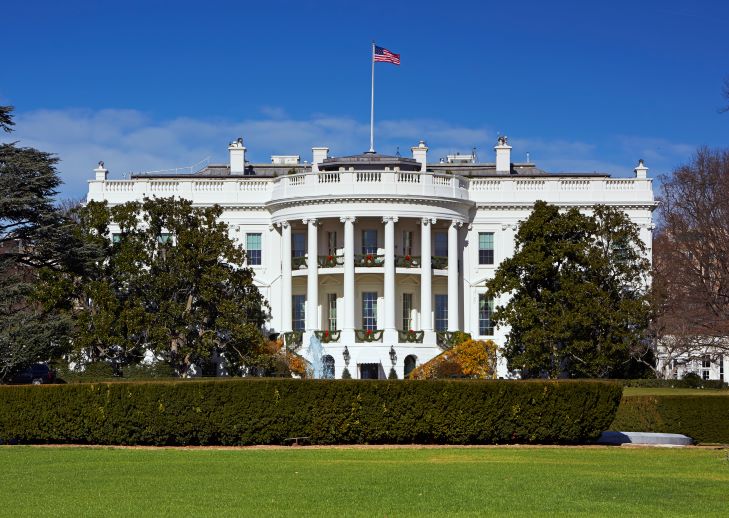 With about five months until the 2020 elections, President Trump is underwater with senior voters – a demographic that he won in 2016. Since these polling numbers came out, the President has been making gestures toward older voters – one might say to curry favor – without advocating major policy changes that would significantly improve seniors’ lives. On Monday, President Trump held an event at the White House touting the administration’s supposed accomplishments in this area.

During this “Roundtable Discussion on Fighting for America’s Seniors,” the President touted an elder fraud hotline that the Dept. of Justice established this year, which has received some 1,800 calls. There is no doubt that criminals are preying on seniors using various scams around Social Security and Medicare – and that this activity has ratcheted up during the COVID pandemic. Any efforts to combat elder fraud are laudable.

Unfortunately, Trump used the elder fraud initiative as a springboard into some rather incredulous claims about everything the administration has supposedly done for seniors. “We’re taking care of our senior citizens better than ever before,” he boasted. It’s an incredulous claim, not only in the wake of the pandemic that has claimed a disproportionate share of older Americans’ lives, but also in the broad sweep of history. Better than ever before? Better than FDR, who created Social Security? Better than LBJ, who signed Medicare and Medicaid into law? Better than President Obama, who provided older patients with protections from pre-existing conditions when seeking health insurance and made significant improvements to Medicare? The usual Trumpian hyperbole aside, the President made several claims about his administration’s ‘helpfulness’ to seniors during Monday’s event that don’t hold up.

TRUMP: “Last month, I announced the deal to slash out-of-pocket costs of insulin, and insulin is such a big deal and such a big factor of importance for our senior citizens. And we slashed costs for hundreds of thousands of Medicare beneficiaries.”

REALITY: The Trump administration announced that participating enhanced Medicare Part D prescription drug plans will allow beneficiaries to access insulin for a maximum copay of $35 for one month’s supply. Only patients who elect (and pay for) enhanced coverage will be able to take advantage of the $35 price cap – and only if their drug plans participate. Millions of seniors whose plans do not include this provision will continue to pay an average of over $1,100 in annual out of pocket insulin costs. The new policy does nothing to reduce the skyrocketing price of insulin.

Market forces, not the President, are mainly responsible for fluctuations in Medicare premiums. More importantly. premiums are not the only costs that seniors bear. Average out-of-pocket costs for Medicare beneficiaries have risen as premiums fluctuate. Many seniors, like other adults, choose plans with lower premiums without realizing that they may pay more out-of-pocket. At the end of 2018, US News and World Report indicated that, without federal intervention, “the prescription benefit in Medicare Part D will start drawing a lot more money out of the pockets of seniors taking pricey drugs.”

REALITY: The President likes to cite this statistic, but it is only one measure of drug prices and it is not the first time that this indicator has gone down in 52 years. This index reflects what the average consumer pays at retail pharmacies, not the actual costs of drugs. Meanwhile, prices for the most often-prescribed drugs for Medicare patients increased 10 times the rate of inflation during a recent five-year period. The popular anti-inflammatory, Humira – which seniors take for everything from arthritis to Crohn’s Disease – now costs up to $72,000 annually – with Medicare patients paying up to $5,000 out of pocket for this drug.

TRUMP: “We’re strongly defending Medicare and Social Security, and we always will.”

REALITY: This is probably the President’s most laughable claim regarding seniors. The Trump administration’s budgets have proposed cutting hundreds of billions of dollars from Medicare. The White House has relentlessly tried to repeal the Affordable Care Act, which made significant improvements to Medicare. The administration has proposed to cut Social Security Disability Insurance by tens of billions of dollars – and imposed a new rule to make it harder for people with disabilities to continue collecting benefits. The President has campaigned tirelessly to eliminate payroll taxes, which directly fund Social Security and Medicare, at a time when both programs need more, not less, revenue. The list goes on. This is the President’s notion of “strongly defending” both programs?

Meanwhile, seniors appear to strongly disagree with proposals from the White House and conservatives in Congress that would tamper with Social Security. This is made clear in a National Committee survey of its member and supporters released last week.

TRUMP: “We’ll always protect our senior citizens and everybody against preexisting conditions.”

REALITY: The opposite is true. The President has done everything to undermine protections for pre-existing conditions, especially for seniors. He tried to repeal the Affordable Care Act, which prevented health insurers from declining coverage for pre-existing conditions – which older patients tend to suffer from more than younger adults. The ACA also limited insurers’ ability to charge older patients higher premiums than younger ones. A president committed to protecting people with pre-existing conditions would not still be trying to destroy Obamacare. When the GOP-controlled Congress failed to repeal the ACA, the White House attempted to sabotage the program through administrative measures, and is still arguing (during a pandemic) that Obamacare should be struck down in the federal courts. The administration also began allowing junk insurance plans with high deductibles that do not protect patients with pre-existing conditions.

Instead of prevaricating and pandering, here is what the President would do if he were a true champion of seniors:

Endorse legislation to expand and strengthen Social Security;
Embrace the Lower Drug Costs Now Act, which would allow Medicare to negotiate prescription prices directly with Big Pharma;
Stop promoting private Medicare Advantage plans over traditional Medicare;
Significantly increase funding for the Social Security Administration to provide seniors with better customer service;
Cease the campaign to eliminate Social Security and Medicare payroll taxes;
Stop proposing $1.5 trillion in budget cuts to Medicare and Medicaid; Don’t propose to slash programs that help to feed lower income seniors and keep their homes heated in the winter;
Condemn calls from conservatives to sacrifice seniors’ lives during COVID-19 for the sake of the economy.
These actions would go a long way toward “taking care of seniors,” but President Trump is not likely to take them. Perhaps that is why seniors, wary of this President’s commitment to their well-being – especially during the Coronavirus pandemic – have continued to turn away from him and may not vote Trump in 2020.