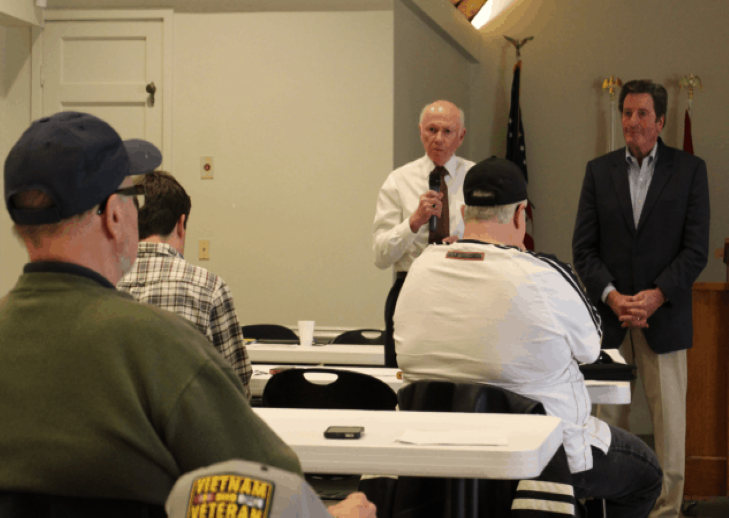 National Committee president Max Richtman joined a true champion for seniors in Congress, Rep. John Garamendi (D-CA), for a town hall with local veterans in Vacaville, California on Monday. Though veterans do receive various benefits from the military and the V.A., most still are dependent on Medicare and Social Security for a healthy and secure retirement.

Richtman and Rep. Garamendi made the case that seniors’ earned benefits can be both expanded and strengthened, despite rhetoric from fiscal hawks who seek to cut what they call “entitlements.”

He told the audience that the National Committee has been fighting for legislation in Congress, co-sponsored by Rep. Garamendi, to boost Social Security. The Social Security 2100 Act includes an across-the-board benefit increase, a hike in the special minimum benefit, and a more accurate cost-of-living adjustment (COLA) formula that would put more income in seniors’ pockets — the Consumer Price Index for the Elderly (CPI-E). The expansion of benefits would be paid for, in large part, by adjusting the payroll wage tax cap so that the wealthy pay their fair share. Last week, millionaires stopped paying into Social Security for the rest of the calendar year.

“Right now, if you make more than $137,700 a year, you don’t pay any payroll tax beyond that. The legislation that the congressman supports would begin collecting payroll tax at $400,000. That brings the program into financial balance until the end of the century, and allows benefits to be improved.” – National Committee president Max Richtman, 2/24/20

The National Committee also endorses a bill introduced by Rep. Garamendi to apply the CPI-E to veterans’ benefits (including military retirement) so that their COLAs would be larger.

The town hall also touched on the pressing issue of prescription drug costs. Like other Americans, older veterans who do not receive medications through the V.A. health system are suffering from soaring prescription drug prices. Richtman said that the National Committee enthusiastically endorses a House-passed bill, The Lower Drug Costs Now Act (H.R. 3), which would finally allow Medicare to negotiate prescription drug prices directly with pharmaceutical companies. He pointed out that the Veterans Administration has been negotiating drug prices for more than two decades.

An analysis published by the Journal of the American Medical Association found that Medicare Part D could save 38-50% on prescription drugs if it negotiated prices as the Veteran Administration does. Most of those savings would be passed on directly to patients.

Richtman appeared at a previous town hall with Rep. Jared Huffman (D-CA) – another stalwart for senior citizens – on February 21st in Mill Valley, California, part of an effort to educate and inform voters about issues affecting older Americans in advance of the 2020 election.