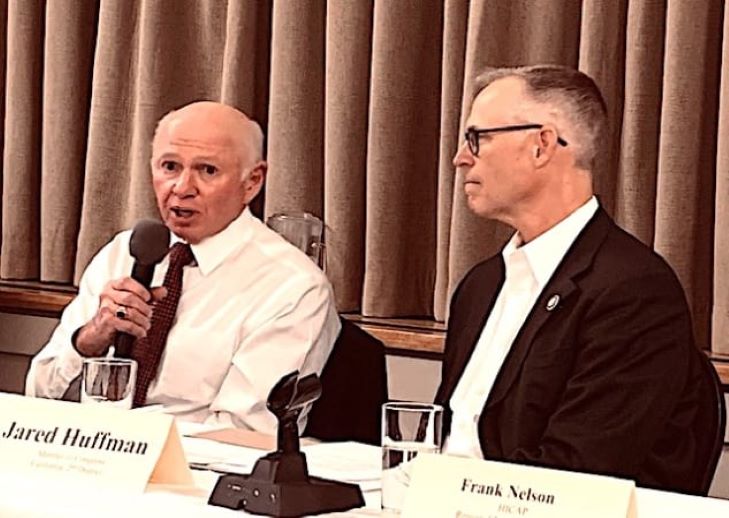 National Committee president Max Richtman brought a message of optimism and vigilance to a gathering of seniors in the San Francisco Bay area yesterday. He joined Congressman Jared Huffman (D-CA) for a packed town hall with seniors and community leaders in Mill Valley, California. Richtman warned attendees that their earned benefits could be threatened in a second Trump administration, while insisting that grass roots advocacy – and voter engagement – can protect older Americans’ retirement and health security.

Richtman told seniors at the town hall that the budget proves President Trump cannot be trusted when he vows to “protect” Social Security, Medicare, and Medicaid – as he did during the State of the Union on February 4th, a sentiment affirmed by Rep. Huffman:

“The federal budget is a statement of values: it’s not a tweet, it’s not a speech – it’s the cold hard truth of where you plan to spend the taxpayers’ money. Unlike the president, I’m committed to keeping promises, and I won’t back down when it comes to protecting Medicare, Medicaid, and Social Security.” – Rep. Jared Huffman, 2/20/20

Both Richtman and Huffman sought to undercut the language of fiscal hawks, who speak of “entitlement reform” to mask their intention to cut benefits. “Make no mistake,” said Richtman, “Social Security and Medicare are not ‘entitlements.’ They are earned benefits that you paid for during your entire working lives. Seniors need every penny of those benefits in order to remain financially and physically healthy — and cannot afford benefit cuts.”

The National Committee has fought for and endorsed the Social Security 2100 Act, which would boost benefits and keep the program on a sound financial course for the rest of the century. Congressman Huffman is a strong supporter and one of the bill’s more than 200 co-sponsors in the U.S. House.

“The Social Security 2100 Act will provide an across-the-board increase for all beneficiaries, strengthen the Social Security trust fund by ensuring that millionaires and billionaires pay into the system, and improve cost of living adjustments going forward.” – Rep. Jared Huffman, 2/20/20

Rep. Huffman and Max Richtman pushed back against the President’s proposed cuts to Medicaid, which helps pay for seniors’ long term care services and supports. Even if the Trump budget is, as predicted, dead on arrival in Congress, the administration is actively working to undermine Medicaid through the rulemaking process – including maneuvers to promote harmful block grants and onerous work requirements that could cause older beneficiaries to lose health coverage.

Richtman has been engaging with seniors around the country, hearing their concerns and encouraging support for candidates this election year who support Social Security, Medicare, Medicaid — and lowering prescription drug prices. He heads next to Vacaville, CA for a town hall with Rep. John Garamendi (D-CA) and area veterans on February 24th.