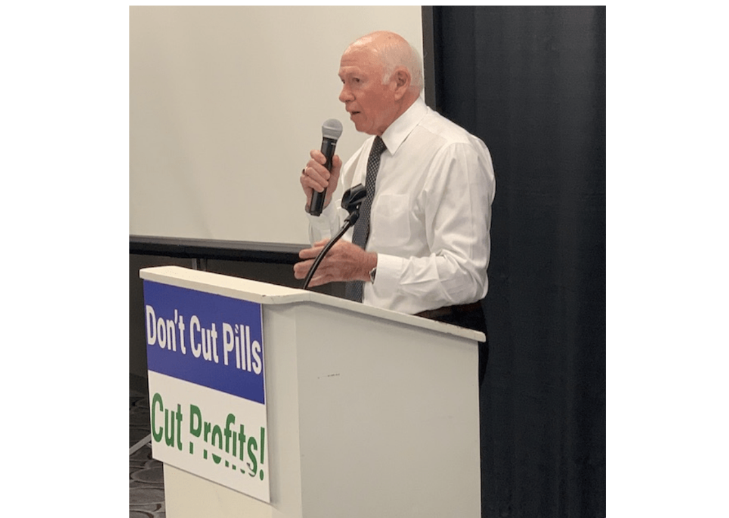 “I purchase my prescriptions from a Canadian pharmacy because costs are considerably less and generic alternatives are available that can’t be purchased in the United States.”

“I have a chronic autoimmune disease. One of my meds costs about $4,000 a month.”

“My insulin drug cost has gone from $72 a month to $600 a month. I’m no longer able to purchase the prescribed brand that my doctor ordered.”

“Our daughter’s caregiver couldn’t afford her medication for a condition she had. She died as a result.”

These kinds of stories are painfully common, especially among seniors living on fixed incomes. The median annual income for Medicare beneficiaries is only $26,200. Meanwhile, the price of the most commonly prescribed medications for seniors increased ten times the rate of inflation between 2013 and 2018. According to AARP, the annual average cost of prescription drugs overall increased nearly 60% between 2012-2017.

Today’s prescription drug pricing town hall was moderated by National Committee president and CEO Max Richtman, who wrote in the Friday edition of the Milwaukee Courier:

“As seniors struggle to pay for life-saving medications, Big Pharma has been raking in record profits. This is unacceptable in the world’s wealthiest country. But there is something that older Wisconsinites can do about it: become educated about the forces behind rising drug prices – and empowered to help bring those prices down to earth for the sake of Americans of all ages.” – Max Richtman, Milwaukee Courier, 10/11/19

The National Committee supports legislation to lower prescription prices, including the bill put forward by the House Democratic leadership that would allow Medicare to negotiate drug costs with pharmaceutical companies. At this morning’s town hall, Congresswoman Moore took the drug industry to task for labeling such measures “socialism,” pointing out that the rest of the federal government (including the military) negotiates prices with businesses, why not Medicare? Price negotiation, she said, is fundamental to capitalism.

The “Don’t Cut Pills, Cut Profits” campaign (https://www.ncpssm.org/campaigns/dont-cut-pills-cut-profits/) is committed to ending prescription price gouging by holding drug-makers and elected leaders accountable, with the help of millions of seniors around the country. The campaign includes town halls, voter education, petition drives, and outreach to Members of Congress to vote for legislation that will reduce drug costs. The next town halls will be held in Portland, Oregon on November 8th and Lansing, Michigan on December 9th.